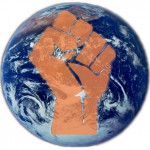 Where Was the Color in Seattle: looking for reasons why the great battle was so white
Elizabeth ‘Betita’ Martinez

In the vast acreage of published analysis about the splendid victory over the World Trade Organization last November 29-December 3, it is almost impossible to find anyone wondering why the 40-50,000 demonstrators were overwhelmingly Anglo. How can that be, when the WTO’s main victims around the world are people of color? Understanding the reasons for the low level of color, and what can be learned from it, is absolutely crucial if we are to make Seattle’s promise of a new, international movement against imperialist globalization come true.

One of the most exciting developments that has come out of the mass actions – in Seattle, Washington DC, Windsor, Canada, Philadelphia and Los Angeles – is the movement-wide discussion about racism, white supremacy and organizing strategies to build a multiracial radical movement for global justice. Elizabeth ‘Betita’ Martínez’s widely distributed essay, “Where Was the Color in Seattle”, put forward the question – why, if global capitalism has the greatest negative impact on people of color around the world and in the United States, was the direct action against the WTO so overwhelming white? Her essay helped launch a dialogue in alternative media and in activists groups throughout the United States and beyond.

We, the undersigned, are peace and justice activists in New York City. We are organizing to defeat the United States government’s offensive of war, racism and repression against the people of the world, both abroad and within the borders of the U.S. We come from many communities, some of us from other nations. We are all colors, multi-generational, workers, students, unemployed, queer and straight. We are writing to you out of concern that destructive patterns of behavior are hindering the growth of the broadest possible long-term movement against war at home and abroad,and preventing the attainment of the social justice we all seek.

In the summer of 2000, I was involved with a coalition that worked to mobilize and organize a demonstration against the Organization of American States (OAS) when they held their meeting in Windsor, Canada. Included in the OAS’s portfolio is the detrimental implementation of the Free Trade Area of the Americas (FTAA). I was very enthusiastic about being involved with this protest because I was still riding the wave of excitement from the victory in Seattle against the World Trade Organization (WTO) and the mass convergences that followed in North America after that. I was perched rather precariously on this wave of excitement, however.

In 1996, progressive activists in California waged a massive, multi-racial and militant struggle to save affirmative action. Though we raised the consciousness of millions of people, voters and non-voters, we lost at the ballot box. Fifty-six percent of California’s electorate voted “Yes” on Proposition 209, thus wiping out affirmative action in the public sector: in education, employment and contracting.

Nadine Mondestin: [or “How to be a Completely Clueless and Aggravating White Activist”,
or again “How to Get on Nadine’s Personal Shit List”]

We Can Do This: Direct Action Against Global Capitalism and U.S. Imperialism
An Interview With Ingrid Chapman

Ingrid Chapman has been involved in direct action organizing for the past 4 years. At 23, she has helped pull off successful mass actions, worked with thousands of activists around the country and bases her work in the question, “How do we build broad based movements capable of challenging global capitalism and US imperialism?” While it is easy to get depressed about the state of the world these days, those in power would also like us to forget that the largest anti-war movement in history was mobilized this past year and that global movements for justice are standing up against capitalism. Ingrid Chapman is one of the many younger generation radicals developing visionary politics and strategic practice to build our movements.

Whiteness hurts everyone. Whiteness is used in the US as a model of humanity, this model sets white as best/right/normal and people of color as second best/wrong/other. Living in this false model of reality makes white people like me assumptive and oblivious.

Transforming the world means challenging and changing institutions and ourselves. Systems of oppression are ingrained in both and, accordingly, must be confronted in both. More than once an activist of color or an actively anti-racist white person has confronted me: “Why are you always rushing off to do solidarity actions with people in other parts of the world when you don’t even make time to deal with your own shit?” They’re right. As white student activists, we are in fact notorious for protesting injustices across the globe, yet neglecting to confront systems of oppression on our campuses, in our communities, and in ourselves. Being an effective student activist means making priorities, and at times we must prioritize slower-paced, not-so-flashy work over dramatic actions that offer immediate gratification. Being an effective white student activist means prioritizing daily dismantlement of white privilege–creating and participating in forums for whites to grapple with racism, allying with struggles that people of color are engaged in, constantly remaining open to our own mistakes and feedback from others.

One of the most helpful tools that I’ve been able to find in developing an anti-racist praxis is listening. In concrete terms, listening is about acknowledging that we don’t have all of the answers and that, in fact, folks who experience the brunt of racialized forms of oppression frequently know best how to wage struggles for racial justice. To listen in this way involves checking the space that we (particularly men) often take up, watching for our own defensiveness, and actively engaging with what we hear. Importantly, this kind of listening means not expecting that it is the responsibility of people of color to “fill” us with knowledge. Instead, we have to learn to ask questions collaboratively, seek answers, and act reflectively. In other words, we have to put ourselves–and what we think we know–at risk. A key part of this is recognizing that the political priorities we take for granted aren’t everybody’s; that is, priorities are raced, classed, and gendered. Listening is thus about recognizing other people’s priorities–in both the sense of being able to notice them and in the sense of taking them seriously. In the end, building an anti-racist praxis–and for that matter, radical multiracial anti-racist movements–calls on us to foster these habits of being, among others.

The best ways I’ve found to help support targeted communities has been to build principled, long-term alliances. These alliances often start with addressing the needs assessed by self-organized folks from within that community. There isn’t a blueprint around the needs, you have to ask and be patient when there’s not always a clear place for an ally. Material resources, fundraising, childcare, turning people out for door knocking – these have all been elements of support work that have been part of my working to build long-term relationships with organizations in targeted communities.

Wherever there has been oppression, there has been resistance.  This resistance has included people who benefit from or are privileged by the oppression of others.  Meaning that within the united states of amerika, white people have fought against white supremacist capitalist patriarchal domination and expansion. Here, the focus will be on the last 150 years or so of white anti-racist activism within u.s. amerikan history.  We are prioritizing the stories of working class people’s, Jewish people’s, womyn’s, queer, and trans folx organizing legacies in an attempt to challenge overlapping forms of oppression as we move forward with the on going and growing movement for collective liberation.

What I Wish I Knew: My Own Goals for Anti-Racist Practice
Catherine Jones

These are some principles that I’ve developed for myself so that I can stay focused on actually doing anti-racist work, rather than thinking and talking about it a whole lot. These all come straight from lessons I’ve learned from my experience of doing the work. I’m not saying that any of these statements is The Answer; this whole list of stuff is more a reflection of where I’m at right now in my ongoing struggle to figure it all out. Maybe it’ll work for you, and maybe it really won’t. My main point in all of this is, if you want to do anti-racist work, do it. Don’t wait until you feel like you’re the perfect anti-racist. There’s a whole big movement out there that needs you!

When witnessing or experiencing racism, sexism, etc interrupt the behavior and address it on the spot or later; either one on one, or with a few allies.
Give people the benefit of the doubt. Think about ways to address behavior that will encourage change and try to encourage dialogue, not debate.
Keep space open for anti-oppression discussions; try focusing on one form of oppression at a time – sexism, racism, classism, etc.