What really happened in the Bay Area this weekend 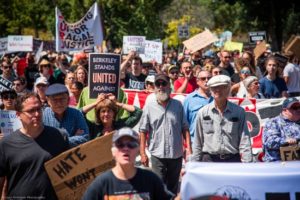 Photo of Sunday’s march against white supremacy in Berkeley, by Brooke Anderson

This weekend’s protests were a stunning display of unity against white supremacy and fascism. It’s difficult to explain the power of a multiracial group of thousands of people from different political and spiritual traditions coming together to seize public space away from people with an agenda that can only be described as genocidal.

Here is a statement from the organizers – a coalition of Black and immigrant, interfaith, anti-racist, anti-fascist, LBGTQ and civil rights groups:

Victory Against White Supremacy in the Bay!

Today in Berkeley we won a victory against white supremacy. We turned out united communities and congregations to directly confront hate speech and hate action, and to keep our streets free of fascists. This is part of a growing national trend of people saying no to hate. We were clear, visible and uncompromising in our demand that they not bring this hate to our neighborhoods, places of worship, public parks, universities and streets. Their Berkeley rally, like their SF rally, was canceled. Fascists were not able to come into a public space and engage in the kind of violence they have too many times before. People worked across lines to keep each other safe. The police, armed with special ordinances from SF and Berkeley City Hall, attempted to stop us from expressing our commitment to defend ourselves and each other against racist, Islamophobic, anti-semitic, sexist, homophobic and transphobic violence. They even arrested anti-racist and anti-fascist protesters on charges as illegitimate as wearing a mask to protect themselves from being targeted by violent supremacists and fascists. Despite this, people stayed united, firm and took care of each other.

It’s also hard to convey how meaningful it was, after Charlottesville, for a very disciplined group of antifa activists to offer protection to the crowd from both police and white supremacists.  While antifa forces are being torn apart in the media, and threatened with “gang status” by the Mayor of Berkeley, it was clear that they successfully contained and defended against the violence of white nationalists visibly ready to fight and nazis carrying knives so that thousands of people could hold a powerful rally without fear for their safety.

After Charlottesville the nation’s sympathy was with people who were violently attacked and killed by outright nazis. Cornell West thanked the antifa publicly for their protection, saying otherwise the faith leaders “would have been crushed like cockroaches.” But now, less than two weeks later, Trump’s narrative of “both sides” being perpetrators of violence has again become the dominant narrative. We must resist it.

The power of the crowd was in its deep unity of purpose. We saw faith leaders thank antifa over the microphone.  We saw Holocaust survivors and their descendants declaring, “Hate speech leads to Holocausts.” We saw pastors from Black churches drawing from centuries of resistance to white supremacist violence.

The backlash for all of this success is already happening.  Eleven people were arrested, and they have also had their pictures blasted in the media. The right-wing is already gearing up to doxx (harass online and release personal information) and threaten them and their families.  The National Lawyers Guild Bay Area chapter is already under heavy attack by the Far Right for their role in offering legal support to people who were criminalized for their resistance to white supremacy and fascism. The NLG is a crucial movement resource, and this weekend they provided more than 50 legal observers to help keep our communities safe.  Please contribute to the bail fund of the Anti-Repression Committee of the National Lawyers Guild and to the National Lawyers Guild itself.

And please join us and many other organizations and activists for a proactive march against white supremacy and fascism, No Hate in the Bay. Join fellow community members to let fascists, the alt-right and all white supremacists know that they are not are not welcome in the Bay Area. Stay for a festival of resistance to celebrate our multi-racial, multi-cultural, queer, trans, dis-abled, and interfaith communities!

PS. We expect that more political repression is on its way, and we’re determined to meet it with united resistance. If you haven’t yet, please read A Troublemakers’ Guide: Principles for Racial Justice Activists in the Face of State Repression.