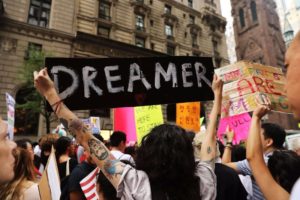 Trump just ended the DACA program. With this one action he is putting hundreds of thousands of young adults who were brought to the US as children, at risk of deportation. This is possibly the most consequential decision he will make on immigration in his first year in office.

The Deferred Action for Childhood Arrivals program, or DACA, has protected nearly 800,000 young adult immigrants from deportation and allowed them to work legally since 2012. It is an American immigration policy founded by the Obama administration in 2012, to help fill a gap left by 15 years of congressional fighting over the DREAM Act. DACA allows certain undocumented immigrants who entered the country as minors (who have called themselves Dreamers), to receive a renewable two-year period of deferred action from deportation and eligibility for a work permit. Read here for more information. Activists are working to mitigate the potential harm, but no one is really certain what will happen next. Stay up-to-date at www.defendDACA.com, including mental health toolkits and guides for DACA recipients.

Trump ran for the presidency on a white nationalist, anti-immigrant, campaign. This move is the kind of we feared on November 9th. Let us not get shocked into complacency.

People are already organizing for a massive response to something so atrocious. If you are near the Bay Area, we will be gathering for an Emergency DACA Rally at 5pm today at the San Francisco Federal Building at 7th and Mission, SF. Please gather people, make signs and come down to join us.

For more on actions and other things we can do:

With love and rage,
Dylan Cooke