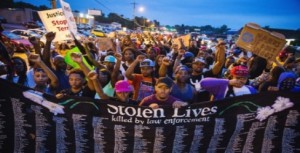 In a historic blockade of the Israeli Zim ship in Oakland this weekend, three thousand people echoed the rallying cry from Ferguson, Missouri: “Hands up, Don’t Shoot.”

We are called to stand in solidarity as residents of Ferguson take the streets for the 11th day, enduring cycles of police violence as they demand justice for Mike Brown and for their community. We know we must act as thoughtfully and courageously as people on the ground in Missouri.

The footage from Ferguson recalls Oakland after Oscar Grant’s murder; New Orleans after Hurricane Katrina; Los Angeles after Rodney King; and countless uprisings for liberation, from South Africa to Egypt to Palestine.

Though they carry different and increasingly advanced tools, the role of the police remains the same. For every Black or Brown person killed by police whose name reaches the news, there are dozens more whose names we never hear.  Millions more have been harassed, beaten, detained, arrested, or locked up.

What’s happening in Ferguson is not just about police brutality or the increased militarization of police departments. It is about a system of policing that uses daily violence on Black, Brown, and poor communities in order to protect the property, politics and profits of the rich. It is about a system of control and terror that teaches white people we should be afraid of Black people, then uses that fear to justify state violence.

And it is also about resistance to that oppression. Beautiful, brave, and steadfast resistance in the long legacy of the Black Freedom Movement.

As the tanks, tear gas and high-tech rifles come home from Iraq and Afghanistan to domestic police departments, we cannot turn away from the reality that U.S. warfare abroad is testing strategies and technology that the police will eventually use at home. In Oakland, we’ll be participating in actions to Stop Urban Shield in Oakland on September 5th to address these very connections. Please join us if you’re in the area.

In the meantime, we have our work cut out for us. According to a recent study, “Blacks are about twice as likely as whites to say the shooting of Michael Brown ‘raises important issues about race that need to be discussed.'”

And we must do more than discuss these important issues about race–we must act. This is a moment that could shape millions of people’s understanding of racism in this country, and raise a call among white people to be agents of change in ending this violence.

Here’s how YOU can help:

1. Ferguson Solidarity: Ways To Support The Fight
This includes info on where to donate and how to build a solidarity action where you are. This document was created by the Organization for Black Struggle, working on the ground in Missouri, and Freedom Side.

Contribute to the bail fund.

Contribute to the organizer fund.

2. Check out Showing Up for Racial Justice’s Police Brutality Toolkit
This is a toolkit made by white anti-racist organizers to support white activists to respond to police brutality. It includes many ways to take action and resources for further learning.

For more information check out: