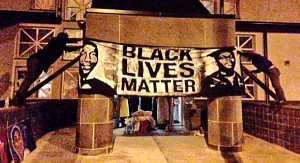 By now I’m sure you’ve heard that white supremacists shot 5 people at the#Justice4Jamar rally in Minneapolis on Monday, and shot at activists again last night. Jamar Clark was a 24 year-old Black man who was executed by Minneapolis police. Since his murder ten days ago, Black organizers and their comrades have been posted at the 4th precinct police station, demanding that 1) the video of the shooting from the police dash cams and the surveillance from nearby Elk Lodge to be made public, 2) an independent federal investigation commence, and 3) the officers involved in the shooting are immediately terminated.

Lex Horan, an alumni from our Anne Braden Anti-Racist Training Program, has been a part of the protests in Minneapolis.  As the mainstream news tries to eclipse the white supremacist nature of the attacks and condemn the tactics of the protesters, we wanted to share his words with you, and invite you to take action.  Here’s what Lex has to say:

White supremacists had already been threatening protesters for days. On Monday, white supremacists in masks and kevlar vests opened fire on protesters who were trying to escort them away from the crowd. The shooting was literally in the backyard of the 4th precinct police station, and police took a very long time to respond. When people called 911, they were put on hold. The shooters got away, unimpeded by police.

Here is what did not happen: “racial tensions simmering.” Do not believe media who quibble about whether these folks were white supremacists: if you go to a Black Lives Matter protest in a bulletproof vest and shoot people, you are a white supremacist. Gunfire did not “break out.” There was not a “shooting near the protest,” there was a targeted shooting of folks who have been fiercely fighting for Black lives.

What happened is that people at the precinct continued to take care of each other after this incredible violence. Folks who have been there for days on end and witnessed the shooting last night are exhausted, traumatized, cold, and recommitted. What happened is that people poured in from all over the city to help hold down the Precinct and keep our eyes open. What did not happen is Mayor Betsy Hodges coming down after white supremacists shot community members in her city. We are still waiting for her to step up.

After Monday’s shooting, community members and organizers have tightened their focus on keeping people safe as we keep calling for justice at the precinct. Groups of people, mostly from North Minneapolis, mostly Black, have taken on the responsibility of keeping an eye out for unsafe situations and de-escalating them. They’ve managed to do it while maintaining a spirit of community & care instead of an atmosphere of fear & paranoia. These are the folks who the Minneapolis police are criminalizing daily, who white supremacy have would have us thinking are the greatest threats to our safety.

Shots were fired again last night. It’s scary. People are holding each other up and refusing to be intimidated.

White folks, if you are on the fence about what is happening, if you are uncertain about standing up for Black lives right now, if you “believe in the cause but not the tactics” – please get in touch, we gotta talk. I have been at the Precinct many times in the last week, including a long night after Monday’s shootings. I would love to describe to you the fierce beauty I have seen there in the face of so much violence. Police and white supremacists are escalating. We need to stand alongside Black folks in this moment, and if you’re not ready to do so, please figure out what you need to get there.‪  #BlackLivesMatter ‪#4thPrecinctShutDown #Justice4Jamar

Here’s what you can do to help:

We must stand up, loudly, together, as the coalition between police and other white supremacist forces grows stronger around the country.  We must stand up and counter both the violence itself and the rhetoric that instigates and justifies it.   We must stand up, like the people on the ground in Minneapolis, and show that their violence will only swell our ranks.