Kicking the Klan out of the Mid-South 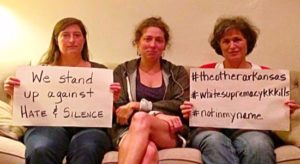 Last summer, in the wake of the Charleston murders and the burning of Black churches across the South, we learned that the Ku Klux Klan was planning its annual leadership training camp in my home state of Arkansas, and using the upsurge in white racist violence as a recruitment tool.

We quickly formed a coalition with organizers in Arkansas, Tennessee, Texas, Missouri, and Georgia.  But we soon realized we didn’t have the relationships in the rural communities surrounding the Klan stronghold that we would need to either effectively mobilize on a short timeline, or organize on a deeper level against the more entrenched forms of racism that the Klan’s presence can overshadow.  The group pivoted its strategy to a social media campaign under the banners #TheOtherArkansas, #NotMyOzarks, and #TheOtherTennessee.

Hundreds of white people from all over the region submitted photos of themselves and their families holding signs saying they would speak out, resist racist violence, and work toward a more just South. Since fall of 2015, the groups involved in the coalition have been focused on local work, and  we’ve stayed in touch and kept an eye out for opportunities to work together.

We asked Catalyst Project to come to the region this summer to train our organizers and help us invigorate ties between anti-racist groups across the mid-South. They will provide political education around anti-oppression issues, strengthen our organizational structures, and train us in skills like campaign development and direct action. Can you give $25 today to help us build capacity in our region where organizing resources are scarce?

We’re seeing a rise in discriminatory and violent policies targeting queer and trans folks, people accessing government services, and Black and Brown children.  Many of the attacks are coming from the state legislature, which is dominated by white conservatives elected in rural districts. Arkansans will overwhelmingly vote for Trump in the general election. But with support, we can better organize areas that have been wooed by the Right and abandoned by the Left for decades. Catalyst Project can help my work for justice in Little Rock, and help our partner organizations to spread ideas, develop support networks, and grow leaders to move white communities toward racial justice.

It is an honor for me to share the work I’m so passionate about with the Catalyst network, and to bring their trainings to my home state. This is a place I’m committed to for the long haul in all of its possibility and contradictions. Your donation will go a long way toward supporting ground work in the mid-South.

Will you help build up #TheOtherArkansas by donating today?