In The Time of Trump, Build Power in Targeted Communities 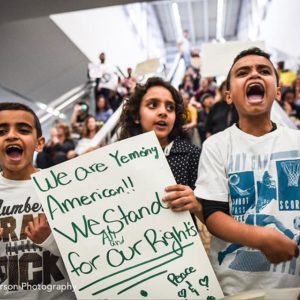 We at Catalyst are reeling from the last couple weeks, like many of you. As the new regime moves quickly in its attacks on so many of our communities, at home and abroad, we are working with our allies to understand what is happening and develop strategies to respond as everything unfolds.

As our allies at Critical Resistance said yesterday, “If Trump’s first 10 days in office are any indication, we are going to have a long hard fight ahead of us. We must challenge ourselves to organize smarter, mobilize stronger, coordinate better, and study more deeply.”

This past weekend, half of our collective was in Philadelphia completing the Anne Braden Program and joining the Braden cohort in the streets.

The rest of us took part in the two-day occupation of San Francisco Airport’s International terminal. Led by the Arab Resource and Organizing Center, Alliance of South Asians Taking Action, and other grassroots organizations, ten thousand people successfully won the release of travelers detained under Trump’s “Muslim Ban.” People across the country took similar actions at dozens of airports from Portland, Maine to Birmingham, Alabama.

This weekend demonstrated that people are ready to resist racist attacks in greater numbers than we’ve seen in generations. Visionary leadership from people of color-led organizations is paving paths as well as horizons for us to move towards, for example Mijente’s innovations in expanding the sanctuary city model.

We wanted to share with you these things that make us hopeful:

“On Saturday we illustrated self-determination: self defense, protection, resistance, rigor and reliance on one another rather than fear, retraction or reliance on law enforcement. Our communities fight for self determination. And this past weekend we actualized it. This past Sunday, ten thousand people joined alongside the leadership of AROC, ASATA, and other grassroots organizations to shut down San Francisco International Airport (SFO). We showed up to resist the Trump regime’s racist executive order repressing the ability to of our families and friends from Syria, Iran, Sudan, Libya, Somalia, Yemen and Iraq to travel freely.  We took direct action to prohibit all business as usual at SFO, until all immigrant people being forcibly detained by US Customs and Border Protection on the airport were freed. And we won. All those detained under the Executive Order were released on Sunday. This was made possible by every individual who took action: every lawyer, every family member, every organization and every worker that joined in solidarity at SFO.

How We Organize to Win
This victory is a small but important one. We know that the work ahead of us will be long and hard. It is, however, important to recognize when we make an impact, and to learn from our actions. At SFO, we were able to mobilize thousands within hours. People showed up with their children, they showed up with food and water and medical supplies. They showed up in force and defiance. This action, and the ongoing disruptions at airports across the country are built on years of organizing and movement building.

We understand that Trump’s attack on one of us, is an attack on all of us. It is no coincidence that Trump’s first executive order targeted the indigenous people of this land. His next order attacked Xicanas and Latinas. Only then did he make his move against Arabs and Muslims. This recent attack on Arabs and Muslims is an extension of the ongoing attacks on indigenous, Black and Brown people in this country and consistent with the history of US wars and repression. We cannot separate the grave impacts of the Trump administration’s policies here in the US from how they impact people globally. We cannot defend Arabs and Muslims here, while turning a blind eye to how the Trump administration has emboldened the longstanding US commitment to waging war on Arabs and Muslims everywhere. We need to take every opportunity available to us to understand these connections, and to have our awareness compel us to action.

What’s Next
The fight is not over. We demonstrated that we can rely on one another, protect, defend and fight for one another over this last week. Community strength, resistance, and self-determination is more important than ever.  Our win for the detained families can be a taste of further victories if we commit to developing our thinking, strategies, and actions to build our collective self-defense against policing, deportations, imprisonment and war. Join BayResistance.org for text alerts and updates on when we need to show up for one another and mobilize.

For many, this last week was the first time they took to the streets. For many others, this last week brought back memories of struggles of the past. For all, we want to offer some resources to help us stay united against fascism and racism, and to develop the tools to be able to better show up for one another, understand this moment, and defend each other.”

Of the many ways to help grow the kind of movements that are going to get us to better days, one vital and tangible method is donating to build leadership of grassroots organizations like AROC and Mijente, who provide national as well as local leadership.

Will you join me in becoming a monthly donor to AROC and/or Mijente, and ask 5 of your friends to get on board too? Will you identify which people of color-led liberation organizations in your town could use more material support, and see how your networks could contribute?

We understand that what’s happening right now is the current iteration of centuries’ of white supremacy, and in some ways is not new. At the same time, we also hear from elders and peers that this political moment is unprecedented. It’s our job, all of us together, to bravely face our fears, confront the real threats, and move boldly towards vision.

With hope, Clare for Catalyst Project