“This is not just Baltimore’s problem, like it wasn’t just Ferguson. This is racism in America.” 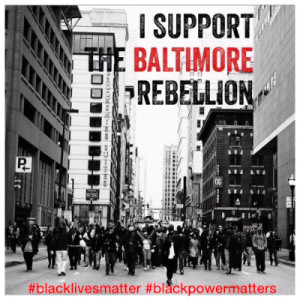 Photos by Devin Allen, a 26-year-old resident of West Baltimore

I’m from a majority Black and highly segregated city near Baltimore. Wilmington, Delaware had the longest domestic military occupation since the Civil War when the National Guard occupied the city for 9 months in 1968 after Dr. King was assassinated– the longest occupation until New Orleans post-Katrina, that is.

Old money white wealth stays across town from row homes in impoverished Black neighborhoods cut through with the interstate. Wilmington’s not at the level of destitution that Baltimore has been dealing with, but it’s so easy for me to imagine that what is happening right now is in my hometown. Just as all these same problems of systemic violence, and people resisting it, is happening here in the Bay Area, and in my other home of New Orleans.

This is not just Baltimore’s problem, like it wasn’t just Ferguson. This is racism in America.

Seeing videos of young Black people in Baltimore calling out the media and the cops; hearing about how school kids were basically set up and dropped into a police trap Monday and have been getting teargassed and tazered all week; learning more specifics of the depths of police brutality in Baltimore… we have no choice but to move forward, towards deep change. 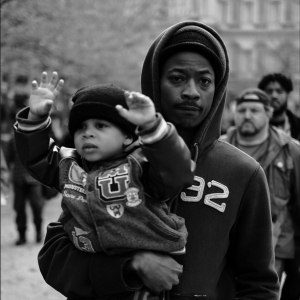 There is no going back, there is no suppressing this, there is no telling people to wait because justice will take time. People know there are no significant attempts at justice being made by the “authorities.” Rekia Boyd’s killer was acquitted this week. There can be no more George Zimmermans, no more Johannes Mehserles.

And even as the street rebellions in Baltimore forced the state’s attorney to indict 6 police officers in Freddie Gray’s murder yesterday, people across the country continue to rise up today because we know that jails can never be a path to justice.

Black people across this country are saying in every way they can that the clock has simply run out on the continued abandonment of Black communities, from state violence to economic disinvestment. We give thanks for the tremendous dignity, humanity and power in Black resistance.

There is a line in the sand. To my white friends, if you are still not sure which side you’re on, I remind you that lines mean you must take an active step to one side or the other. I hope you will join the side of healing and justice. Our own humanity depends on joining with Black liberation struggle, and the call is way too clear for anyone to ignore.

Real change comes from grassroots people’s movements. If you’re not already part of collective action, now is the time. For more resources on how to organize white people in this political moment, visit here.