Dispatch from Chicago, on Laquan McDonald 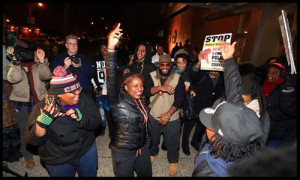 Debbie Southorn writes to us from Chicago, where street protests have exploded after the release of a video that showed police killing LaQuan McDonald.  Debbie is an alumni of Catalyst‘s Anne Braden Anti-Racist Organizing Training Program, and since summer of 2014 has been active in We Charge Genocide, “a grassroots, inter-generational effort to center the voices and experiences of the young people most targeted by police violence in Chicago.” As the mainstream news tries to fade these stories out, we wanted to share her words with you, and invite you to take action.  Here’s what Debbie has to say:

In October of 2014, Jason Van Dyke, a white Chicago Police Officer, killed a Black teenager named LaQuan McDonald by shooting him 16 times.  On November 24th, 2015, the dashcam recording of LaQuan’s execution was released to the public – but only because of a court order after a lengthy lawsuit by an investigative journalist.  Protests have erupted across Chicago demanding that Mayor Rahm Emmanuel resign, as many question why the video was suppressed for so long during his re-election campaign.  The city’s elite are scrambling to press charges, assign taskforces, invite the Department of Justice to investigate the Chicago Police Department, and find the right scapegoats.  Meanwhile, the families of victims of police violence, young Black organizers, and more and more people across the city continue to call for Justice for LaQuan, an end to police violence, and a Chicago where #BlackLivesMatter.

Thousands of people have taken to the streets, pushed through police barricades, and disrupted business as usual in Chicago. Corporate stores on the ‘Magnificent Mile’ lost up to 50% of their sales on Black Friday because of protesters blocking entrances.  The police superintendent was fired. The head of the Internal Police Review Authority resigned. Calls for the resignations of State’s Attorney Anita Alvarez and Mayor Rahm Emmanuel are literally sweeping the city, with hundreds of new people participating in organizing actions almost daily.

It’s never been so clear to me as these past weeks, that young Black people organizing in this city are powerful and the city’s elite are scared.  They are feeling the pressure.  And while Rahm and Anita’s resignations are a critical step towards accountability for this #ChiCoverUp, and certainly reason to celebrate, those steps alone won’t mean #JusticeForLaquan and for Black communities devastated by police violence and decades of disinvestment.  We have to be relentless about lifting up the transformational demands that lead us to this moment.

As young Black leaders in Chicago made clear with their press conference before the Laquan McDonald video was released, real justice will look like taking the $4 million dollars Chicago spends on policing every single day, and using it instead to #FundBlackFutures.

Friends, family & comrades outside Chicago have been asking me how to support and here are some quick thoughts:

PS. Last week Catalyst sent out an email calling for people to take action against Islamophobia and militarism. Here’s a new opportunity from Showing Up for Racial Justice: a conference call on Showing Up Against Anti-Arab Racism and Islamophobia. Thursday, Dec. 17th at 5pm PT/6pm MT/7pm CT/8pm ET.