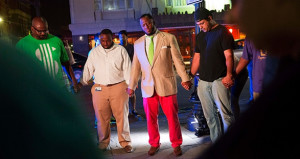 These are two responses from Catalyst Project members to the Charleston Massacre, including action steps. Since we wrote these, the first one was published in the SF Examiner.

Nine Black lives were taken in Charleston’s Emanuel African Methodist Episcopal (AME) Church yesterday by a young white man carrying out the legacy of white supremacy. He sat beside them for an hour before he began shooting.

In Charleston last night, a 5-year-old child survived the massacre by pretending to be dead. I ask my white people to take a moment of silence and imagine this child laying on the ground, among murdered adults, her body telling her that she had to lie as still as the dead in order to live. Five years old.

Dylann Roof, the 21-year-old white male shooter, was apprehended today ‘without incident’ while still armed, having just shot and killed 9 people in a church. In contrast, remember the police murder of Tamir Rice, 12 years old and Black, sitting in a park with a toy gun.

I hear Black people saying today, “What do we have to do to stay alive?” and asking where they can possibly be safe.

The message, delivered at the barrel of a gun and then affirmed in the courtrooms of this country is that if you are Black: Don’t play. Don’t swim in a public pool. Don’t walk home alone at night in a hoodie with Skittles and Arizona iced tea. Don’t pray in a church. Don’t breathe.

For those of us white people living in this time and place, who think that in apartheid South Africa we would have actively opposed white supremacist rule, who think that if we’d been alive during the civil rights era we’d have been Freedom Riders or at least supported the sit-ins, if you would have actively condemned the Birmingham church bombing as a terrorist act… don’t sleep on this moment we live in now in which you too are being called to take a stand.

The killing of Black people in this country must stop, but it won’t until and unless we all rise up and demand it. Black communities are in motion for justice, like the national leaders of Movement for Black Lives convening right now in Detroit. For the rest of us, we must get on the right side of history putting our values into action.

With urgency, from our hearts to yours
Clare Bayard
Catalyst Project

Before Dylann Storm Roof took the lives of 9 Black people at the Emanuel AME church in Charleston Wednesday, he said, “I have to do it. You rape our women and you’re taking over our country.”[1]  It is an old story, reinforced by nooses, and chains, and cages, and guns, and laws, and the many other tools of white supremacy.

Roof said he wanted to “start a race war,” but the truth is this country has been in a race war since the first days of indigenous genocide and slavery.

So far this year, 147 Black people have been killed by police.  While Dylan Roof sported the insignia of apartheid South Africa, and not a police uniform, he too was violently enforcing the criminalization and dehumanization of Black life.  He, too, became a foot soldier of a racist system in which some were, as Audre Lorde and #BlackLivesMatter write, “never meant to survive.”

But this old racist story, and its deathly consequences, have also been defended against by centuries of Black resistance.

We call on the spirit of Ida B. Wells, a key leader of the anti-lynching movement of the early 20th century, and the countless others whose names never made it into our racist and sexist history books. She writes,

“Our country’s national crime is lynching. It is not the creature of an hour, the sudden outburst of uncontrolled fury, or the unspeakable brutality of an insane mob. It represents the cool, calculating deliberation of intelligent people who openly avow that there is an “unwritten law” that justifies them in putting human beings to death without complaint under oath, without trial by jury, without opportunity to make defense, and without right of appeal….In fact, for all kinds of offenses – and, for no offenses – from murders to misdemeanors, men and women are put to death without judge or jury; so that, although the political excuse was no longer necessary, the wholesale murder of human beings went on just the same.”[2]

Wells wrote about how lynching was justified by criminalization, but was actually used against Black people who resisted white supremacy.

It is nearly impossible not to see the parallels today, from police killing or beating people for “resisting arrest,” to Wednesday’s vicious killing in a Black southern church with a long history of resistance.

The Emanuel AME church was co-founded by Denmark Vesey, who played a key role in planning a major slave uprising in Charleston in 1822.  The rebellion was stopped before it could begin, and Vesey was hanged along with 34 other organizers. The church was burned to the ground.[3].  This is how white supremacy responds when Black people fight for their freedom.

Today, a resurgence of Black freedom struggle again aims to overthrow white supremacy in the face of brutal repression.  The question is, how many of us white people will stand with them?

Here are 4 ways to take action:

• Pick out some things from this #CharlesonSyllabus to read with friends, co-workers, or comrades.
• Read this response by #BlackLivesMatter and use it as a conversation starter with white people to talk about the deeply embedded anti-Black racism in this country.
• Learn about the organizations doing Black liberation work close to where you live, and offer support to their work by volunteering and/or donating.

With so much grief and rage,
Isaac Lev Szmonko