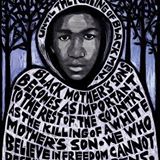 To our community and families–

In the wake of the George Zimmerman verdict that “declared open season” on Black bodies, our broken hearts are shouting for change. This moment is a wakeup call- in the same month in which the Supreme Court gutted the Voting Rights Act, this acquittal says it’s still legal to lynch Black people. Last year, every 28 hours a Black person was killed by police or vigilantes, and we barely hear about most of these murders, especially when the person killed is female or transgender. 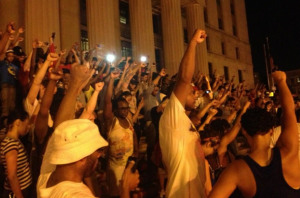 “Justice was always going to elude Trayvon Martin, not because the system failed, but because it worked. Martin died and Zimmerman walked because our entire political and legal foundations were built on an ideology of settler colonialism — an ideology in which the protection of white property rights was always sacrosanct; predators and threats to those privileges were almost always black, brown, and red; and where the very purpose of police power was to discipline, monitor, and contain populations rendered a threat to white property and privilege.”   Robin D.G. Kelley

ACTION STEPS BELOW THE JUMP

To our Black friends and family members– we stand behind you in mourning, in anger, in solidarity. We honor your resilience, your continued dignity in the face of such concerted attempts at dehumanization, your importance to this world. With deep respect, we recommit ourselves to working beside you to root out the horror that is white supremacy.

To our fellow white people committed to racial justice, we say: If not now, when? Take leadership in your community to be part of moving massive numbers of white people away from our participation in systemic racism. We each need to find action steps, ways to better translate our commitments into effective action. We need to take responsibility for shifting the culture that allows Marissa Alexander, a Black woman defending herself against an abusive partner, to be sentenced to 20 years for firing a warning shot by the same attorney who prosecuted Zimmerman.

As abolitionists, we at Catalyst Project seek justice and community healing, not punitive incarceration. Guilty verdicts and prison sentences do not move us towards human rights. It’s a dead end, as Adrienne Maree Brown writes, “to rely on the system that set them up for death to deliver their justice.”

At the same time, we must mount a clear, massive challenge to the system which pronounced Trayvon Martin’s life so insignificant that his death didn’t even legally constitute manslaughter. On every level– from kitchen conversations to grassroots mobilizing to policy changes– it’s time.

As Deon Haywood of Women with a Vision, said this Sunday at a Solidarity Rally for Trayvon Martin in New Orleans,

“We talk about rights, but sometimes there’s a thin line between rights and your LIFE – I want you to stand up. And I want you to be angry and frustrated enough that you can not longer sit down. That you get up in the morning, you say, “What am I gonna do today?”

Get involved with local racial justice efforts. Listen to voices of color, especially Black folks. Talk to your people, especially the ones who don’t get what’s going on. Write letters to Marissa Alexander (address below) and Trayvon Martin’s mother.

Figure out how you can be in this for the long haul. Join an organization, or if you’re already part of something, help friends plug in somewhere meaningful.

Support Black activists and Black organizing projects materially and financially. Support national organizing and also directly supporting organizing in your area. This national list of grassroots racial justice organizations contains many groups rooted in Black communities, and this is only one place to start.

Sign Color of Change’s petition to repeal Stand Your Ground laws, a key intervention supported by folks ranging from the NAACP to Malcolm X Grassroots Movement.

Join the conversations about privilege, power and justice at We Are Not Trayvon Martin.

Keep posted on proposed next steps from Malcolm X Grassroots Movement.This is their list of key interventions. Can you contribute to this racial justice agenda?

You can also write to Marissa in prison at this address: 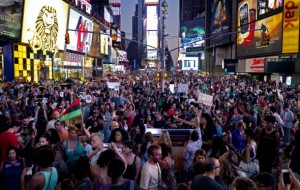