Act Now for Palestine, in the Spirit of South Africa

We write with love, grief and rage about the intolerable assaults on the people of Palestine. We call to all of you, with hope and urgency, to join us now as a part of vibrant global resistance that is rapidly gaining strength.  This letter ends with action steps. 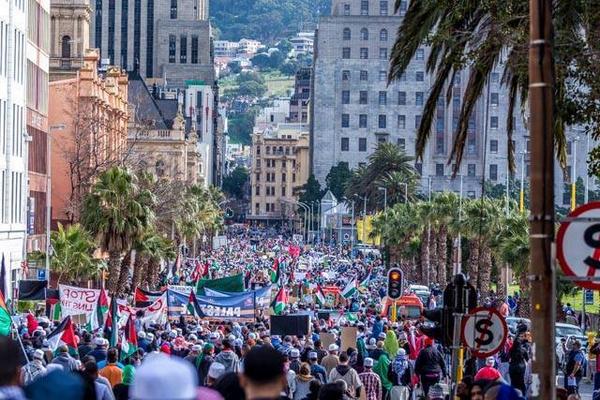 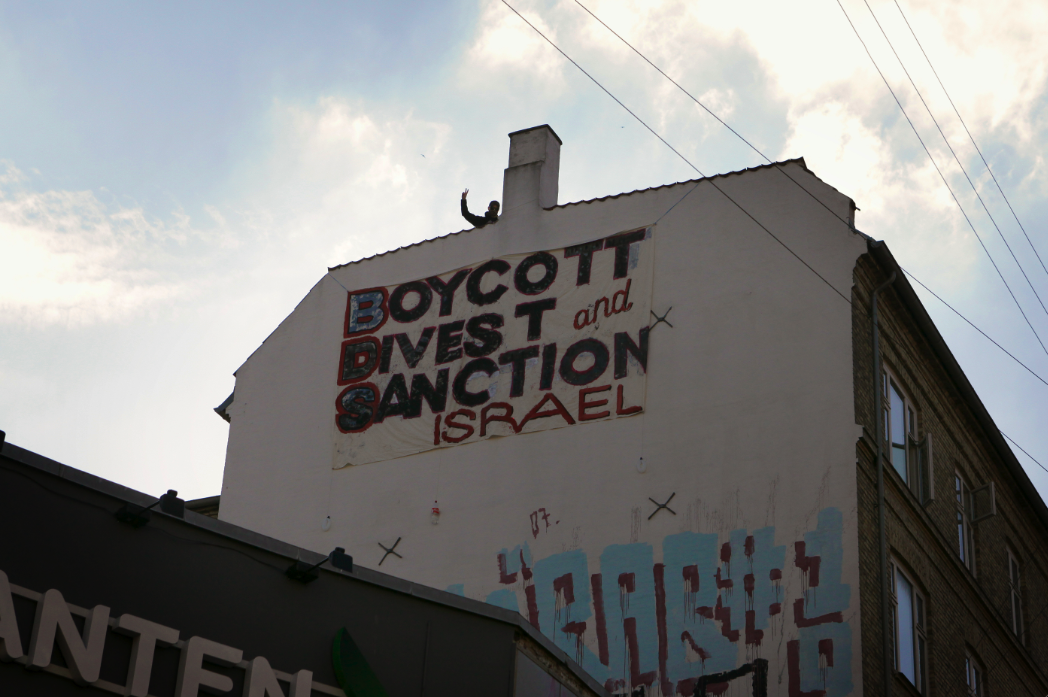 Above: 40,000 protest in Capetown, South Africa, and banner drop in Copenhagen, Denmark.

If you are confused or nervous when it comes to thinking or talking about Israel and Palestine, you are not alone. For many of us in conversations with family and friends, any critique of Israel is treated as an attack on Jewish people’s right to safety. Taking a stand for Palestinian self-determination and the right of all people to resist military occupation can feel like a big risk.

There are reasons most of us in the U.S. have been raised with this confusion and fear. Israel is a key strategic ally of U.S. empire and the biggest recipient of US military aid at $4 billion a year. We have been inundated with racist narratives of Israel as “a land without a people for a people without land”—similar stories to those that are told about Manifest Destiny and colonization in the U.S.

And just as we must unlearn the white supremacist history of the U.S. in order to forge a just future, we have a responsibility to untangle the truth about the history and current reality in Palestine so we can get on the side of justice. We cannot turn away from the violence our country is enabling. 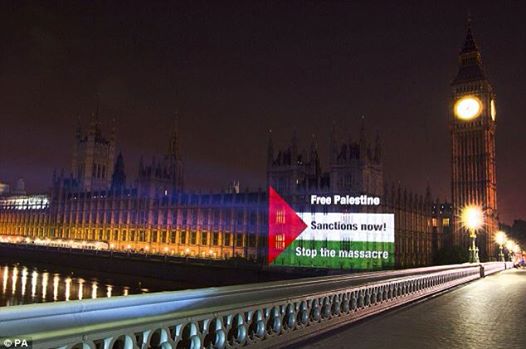 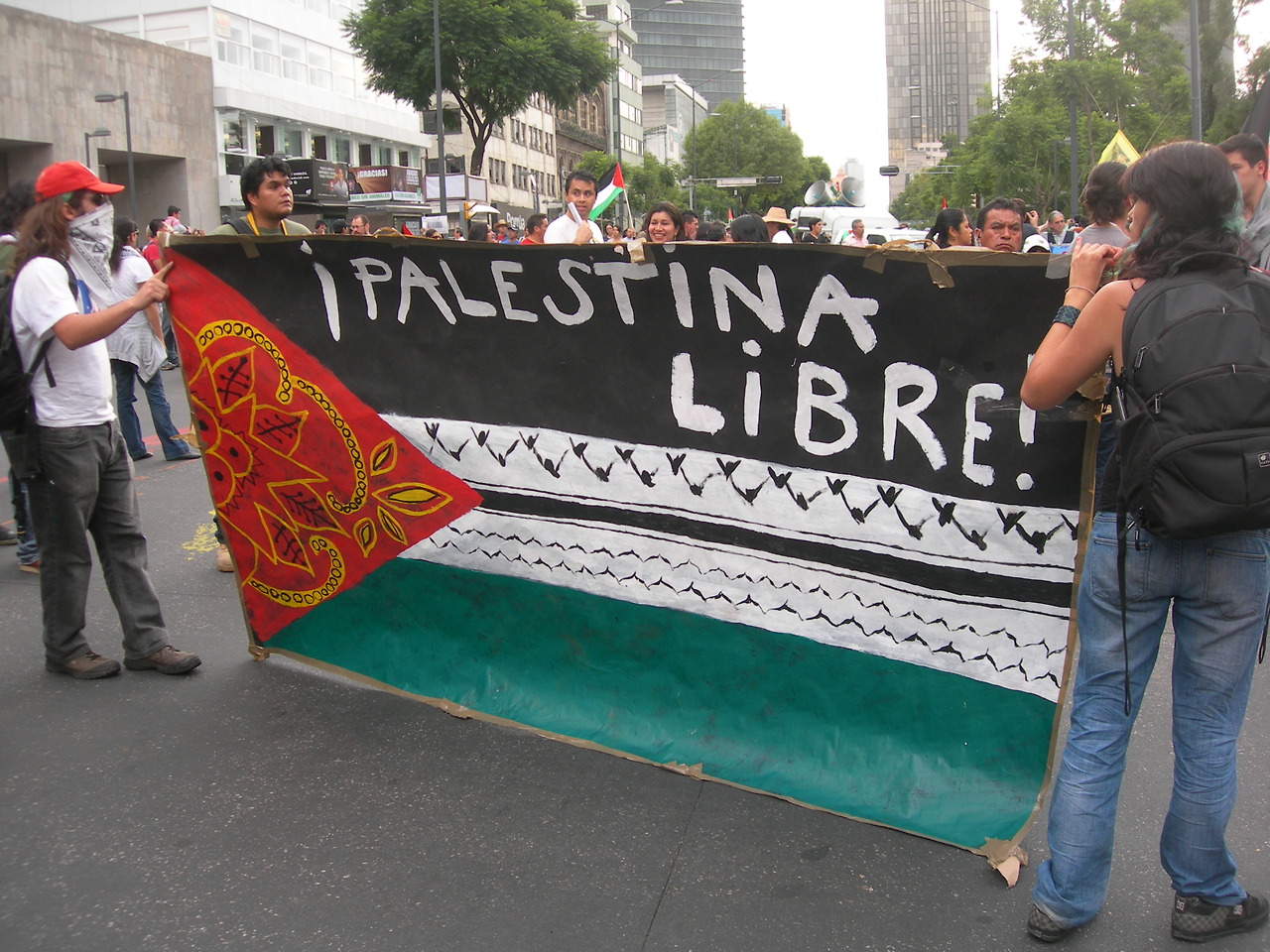 Above: Free Palestine, projected onto the Houses of Parliament (UK), and on a sign in Mexico City

For years, Catalyst has organized alongside many people actively resisting contemporary Zionism, including Jews, Palestinians and other Arabs, and activists working in human rights and racial justice struggles within and outside the US. With their mentorship, years of study, and our experience co-organizing a delegation to Palestine in 2009, we in Catalyst have come to believe that Zionism doesn’t create safety or equality for anyone at all, whether they are Jewish, Arab, both or neither.

We see that the Israeli occupation of Palestine is fundamentally based in racism, and that the massacres in Gaza right now are a brutal enforcement of racist apartheid policies–executed with bombs bought by U.S. taxpayers. They are meant to break resistance, but they will not succeed.

White people opposed to racism, from all backgrounds, have a role to play in this critical moment of history. We must name Zionism as a form of racism and stand with people of conscience around the world to oppose Israel’s apartheid regime.

This is the time to move–take actions; pressure your elected officials; organize your crew; have those difficult conversations with family, friends, and co-workers; and do whatever you can to build on the urgent clarity that apartheid must end.

Use resources like this great short article from our allies at War Times to get some context, history, and facts about what’s happening in Palestine. Here’s a short 101 video from Jewish Voices for Peace, and there are plenty more resources below.

Step 2: Get inspired by powerful, creative actions from around the world!

Amidst the bloodshed of the past few weeks, the momentum of global uprising has led five Latin American countries to withdraw their envoys from Israel. Spain has embargoed arms sales. Maldives announced the boycott of Israeli products and the annulment of bilateral agreements with the country. Dublin’s city council is calling on Ireland to impose an arms embargo and sanctions on Israel. In the UK, activists have occupied and shut down a subsidiary of Israeli arms firm Elbit, and 100,000 marched in London.

In addition to this urgent call to action issued by a broad coalition in Gaza’s civil society, Palestinians have asked for a day of action across the globe on this Saturday August 9th.  Please join an action.  If you are in the Bay Area, please join us on August 16th to block an Israeli ship at the Port of Oakland. Seattle/Tacoma, Los Angeles and Vancouver are also planning blockades. If you’re not in one of those places, here are actions you can take right now:

We will not recount staggering numbers of the dead and the displaced. Numbers cannot convey what it means to have a homeland stolen, to live under military occupation and siege, to be deprived basic human needs, to be blamed for racist massacres of your own people, and to be murdered with impunity. Take a few minutes to remember their names in this beautiful, moving short video.

Palestinians who are living under occupation, apartheid, and those who have been exiled are fighting for their lives and human rights.  Millions around the world are joining in this call for justice.  Let’s answer the call together.

The Case for Sanctions Against Israel

Statements from Our Allies