9 actions and resources for thanksgiving 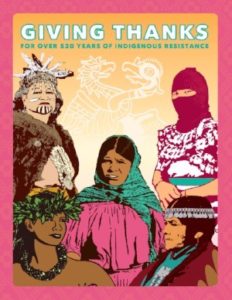 Today as many people around the country are gathering and sharing food, many more are also talking about the origins and mythology of thanksgiving, a feel-good story of settler benevolence designed to obscure the real history of land theft and genocide.  More than any other time, except perhaps during the 1970’s and the height of the American Indian Movement, people are talking about and showing up for Indigenous struggles. Imagine we all did the work today so that future generations look back on this time as the moment when non-native people changed our understanding about our history and started to take Indigenous sovereignty seriously.

This time last year so many of us were in deep support of Standing Rock, a struggle that at its foundation was a movement for Indigenous Sovereignty. Indigenous sovereignty would mean that the U.S. government would honor its treaties and recognize the Lakota nation as a sovereign nation like France or Brazil. But on a deeper level, Indigenous sovereignty calls for all of us to rethink our relationship to land, to each other, to how we make decisions in a way that considers the impact on the next seven generations.

In a panel that a group of Indigenous solidarity activists including our own Dylan Cooke organized called Living on Ohlone Land, Corrina Gould, a fierce Ohlone leader shared, “True allies and accomplices ask permission to do something, they organize it and then they follow through by doing the work to get Indigenous people into the room without adding onto the work that Indigenous people have to do to get into the room. It’s not about following a protocol. Come onto this land in a humble way; this land is alive, there were people before you and there will be people after you. What does it mean for us, humans, to be the bridge between the past and present?”

Let us continue to do that work together. Let us show up for the world that we know is coming.

If you’re in the Bay Area we hope to see you tomorrow at the annual Black Friday prayer/protest at the Emeryville Shellmound, a critical local fight to protect Ohlone sacred sites.

Here are some resources to rethink thanksgiving, to have conversations with other people about it, and to continue to do the much-needed work of coming into right relationship with ourselves, with native people, with the land, and with our own past.