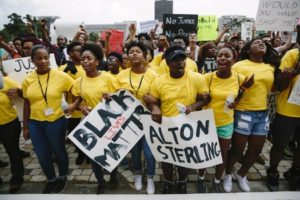 This week has seen so much grief and rage at the police murders of Alton Sterling and Philando Castile. It has also been filled with love and bravery. In response, tens of thousands of people have taken to the streets across the country to say: We will no longer accept ongoing state-sanctioned violence against Black lives.

Last Sunday, in response to the police execution of Alton Sterling, I joined thousands of people from across the state and nation who were brought together by powerful Black youth organizers including The Wave, North Baton Rouge Matters and BYP 100 NOLA. The Wave organized a rally at the capitol, and when we arrived, we were greeted on nearly every corner by families, organizations and church groups. In the enormous crowd, I was side by side with organizers from many different movements, as well as people that I had never seen at a racial justice event before. The movement for Black lives was swelling across the entire city, just as it is across the country.

Three hours later, over one hundred people had been violently arrested by heavily militarized police officers. Police and media have claimed that protesters provoked the violence, but it was the police who met a peaceful rally ready for a riot. It was police who trained their rifles on protesters and initiated the violence. The ACLU sued the Baton Rouge Police Department on Wednesday, and 100 out of 185 charges were dropped by the DA yesterday.

As the on-going police violence against Black people across the country wakes more people up to the reality of white supremacy in this country, we must not miss this opportunity to mobilize more of our white friends, family members, coworkers and neighbors. This is the time that we need to step into leadership in our communities.

Here are concrete steps you can take right now:

This week, 3 years ago, Black Lives Matter was born. We are in transformative times. In this moment, we must bring our full selves to support the Black-led organizing that is fighting back against state-sanctioned violence. We have to fight to end white supremacy and accept nothing less.

Hannah Pepper-Cunningham (Anne Braden Program alumn 2011) is a theater-maker and cultural organizer based in New Orleans, Louisiana. Hannah is a member of the New Orleans chapter of European Dissent.